WHO IS MAX WILSON?

Max Wilson is an outstanding artist and comic book creator.

[That's not really true, but that's what he told us to write.] 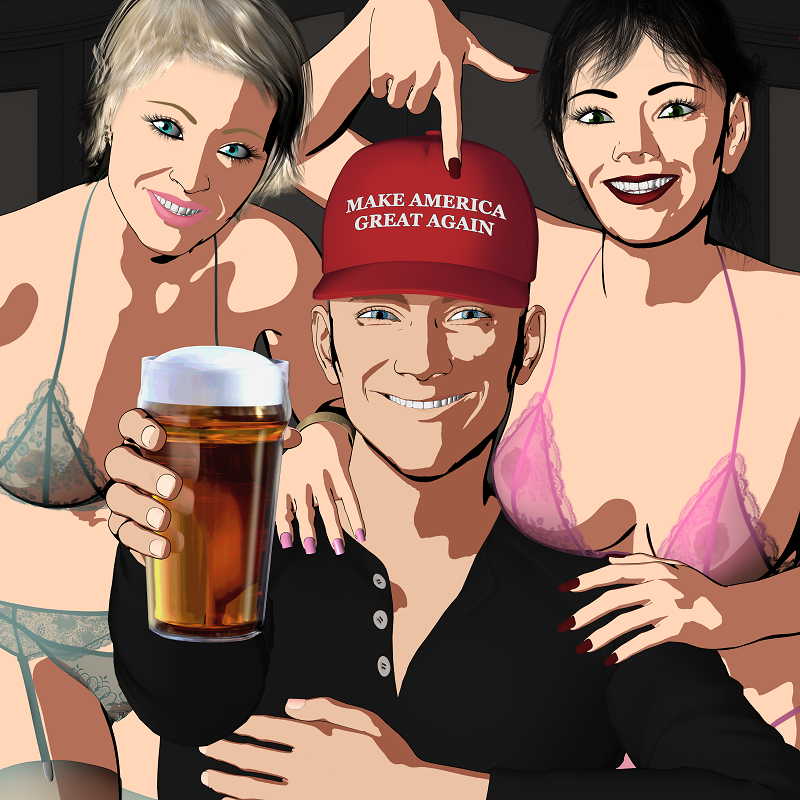 Max Wilson enjoys an afternoon beer in the studio relaxing with his two favorite models: Vicki (pink) and Nina (green)

Max Wilson was born some time ago, somewhere. He had an abnormal childhood. He watched a lot of film noir movies, television and cartoons. He read comics, technical magazines and Playboy. He used to read these under the desk in English, History and French classes. He failed French. The Science Master discovered one of his Playboy magazines. The magazine was confiscated and Max received six cuts of the cane across his fingers, on both hands. He never got the magazine back. He discovered that he really liked girls, but he never got to meet any because he went to an all-boys school.

Later he worked in advertising photography for many years where he enjoyed an environment of young scantily clad female models flitting about in dressing rooms and studios. He developed a fine appreciation of high quality fluff. He learned how to drink beer. Even later he went to a highly prestigious art school where he learned how to draw his favorite life objects — nude girls.

WHAT DOES MAX WILSON PRODUCTIONS DO?

DOES MAX WILSON HAVE A MISSION STATEMENT?

Very definitely. His mission is to make money and have fun creating comics with pretty girls in them. Apparently this is called misogyny (go figure). On that basis, Max Wilson's mission is to set the highest standard for 'world's best practice' misogyny – which he defines as the love and respect of women and femininity.

And that's it. That's the mission statement of Max Wilson.

The primary purpose of this site is to display and market our products. They're a work in progress.

Soon we'll add a store so you can buy digital comics, fabulous art to hang on your walls and other Max Wilson merch and Q‑32 collectables.

Everything on this Max Wilson Productions site loads in the same window or tab, unless you've set your browser to do otherwise. On-site navigation is by means of simple Link and Back button operation. Candy Toons opens a new window/tab and imports YouTube videos if you watch a Candy cartoon. You'll have to close those windows/tabs to come back in. All off-site third-party links will open in a new window or tab.

What all this means basically, is that if you stay on our site, you'll stay on our site. If you go off site with one of our third-party links, you'll still be on our site when you want to comeback. Confused? We hope not. It used to be so simple in the olden days before tabs. Whatever, just have a go and see what happens. Have fun, good luck.

The site is designed to be fluid. That is, it displays differently on various platforms to suit the user's screen format. That's the current philosophy in web design. That's a great idea, but frankly it doesn't really work out too well. Layout and presentation go all over the place. So, while this site is fluid by design, it looks and works best on a desktop, laptop or tablet with screen resolution of 1920 x 1080 pixels. We structure content on that basis. Good luck with anything else.

Everything on this site is copyright of Max Wilson Productions. Don't even think of knocking anything off. We'll get very angry and come after you. Just buy our stuff. It's a lot easier and you'll be a lot happier that way.

Q: Who's the blonde tart who features in the Max Wilson Productions header logo?

A: She's one of Max's first pin-up paintings, drawn from photos of Barbara Valentin as the model, which never got finished. We needed a splash screen quickly when we first started this site, she got grabbed from the files, went up, looked good, stayed there and is now a part of the great Max Wilson tradition.

"It's just tradition, you understand Watson!"